is open to every musician from all over the world with a focus on classical music, folk/traditional music, jazz and musical. It is dedicated to promote musical culture under the banner of world peace and understanding among nations. The competition will be held in the following disciplines for classical music: piano, strings, wind instruments, plucked instruments, accordeon, percussion, voice, Lied duo, piano duo and chamber music. As well as folk/traditional/baroque music instruments, jazz and musical. Each discipline is divided into different age categories: Youth, Junior, Intermediate, Advanced, Senior and Amateur. There is no age limit for the participants.

Prof. Peter Steijvers has been professor of oboe and chamber music since 1978 and head of the chamber music department of Maastricht Conservatory, Netherlands since 2008. He became also the chair of the final assessment committee of Bachelor- and Master of music. He studied with Koen van Slogteren. Since 1977 he has been the principal oboist of the Limburg Symphony Orchestra Maastricht and has also performed as a soloist with various chamber orchestras and ensembles in the Netherlands and abroad. Prof. Steijvers is also active as a conductor, appearing regularly with the chamber ensemble of the Limburg Symphony Orchestra, as well as conducting the full orchestra in a series of youth concerts as well as organizing important festivals: The night of Classical Music and the yearly Festival of Chamber Music.

Mr Vladimir Tolpygo, who will join our jury, is a member (First violins) of the famous Munich Philharmonic Orchestra. 2012-2013 he was a violinist in the SWR Radio Symphony Orchestra Stuttgart and a member of the Münchner Rundfunkorchester till 2016. Mr Tolpygo studied with Sergei Fatkulin, Sergey Arutyunyan, Roman Nodel in Mannheim and in Karlsruhe with Laurent Albrecht Breuninger, where he received his Konzertexamen diploma. He has won prizes at a number of national and international competitions: Prémio Jovens Músicos, Júlio Cardona, International Competition of Young Performers, Pietro Argento and Andrea Postacchini International Violin Competition.

Our fifth jury member is Mr Stefan Wagner, who is the principal trombonist of the Saxony Philharmonic Wind Orchestra. From 2004-2007 he was the assistant principal trombone in the Rundfunkblasorchester Leipzig. He studied at the „Hanns Eisler“ Academy of Music Berlin with Harald Winkler and at the University of Arts Berlin with Joachim Mittelacher and Stefan Schulz, where he received his Konzertexamen diploma. He is also holding a diploma in Early Music from the University of Music and Theatre Felix Mendelssohn Bartholdy Leipzig. Mr Wagner has given concerts in many European countries as well as in Asia and South America.

Mrs Esther Feustel is a member (2. violins) of the Deutsche Oper Berlin. She studied in Berlin and Mannheim under the guidance of Tomasz Tomaszewski, Dora Bratchkova and Marco Rizzi. She held a scholarship from the Landessammlung Baden-Württemberg and won the „Chairmen’s Award“ of the European Union Youth Orchestra. In 2012 she became the principal of 2nd violins in the Philharmonische Staatsorchester Mainz, before becoming a member of the Deutsche Oper Berlin in 2015. She has played as a guest with various orchestras such as the hr-Sinfonieorchester Frankfurt, the Staatskapelle Dresden, the Gewandhausorchester Leipzig, the Deutsche Radiophilharmonie Saarbrücken Kaiserslautern, and the World Orchestra for Peace. Since 2017 she is also a member of the Estonian Festival Orchestra.

Mr Timo Schabel is a member of the ensemble of the Staatsoperette Dresden. He studied in Mannheim with Prof. Dr. Alejandro Ramírez. He has received further trainings from KS Angelika Kirchschlager, Oly Pfaff and Kobie van Rendsburg. He was formerly engaged by the Staatstheater Oldenburg. Previously he was seen on stage i.a. as Pedrillo, as Mime in Wagner’s Rheingold, Camille de Rosillon and Orpheus in Offenbach’s Orphée aux enfers. Outside of Opera, Timo Schabel is also a passioned Lied and Oratorien singer with repertoire including several Bach cantatas and passions as well as Handel’s Messiah, Dvořák’s Stabat Mater or Rossini’s Petit Messe Solenelle.

The main goal of the competition is to find exceptional musicians and to give them an opportunity to showcase their unique talents. A selected group of prize winners will receive an invitation to perform at the prize winner concert, which will be held in the PHILHARMONIE BERLIN (chamber music hall, 1180 seats), where they will receive the awards. Professional pictures will be taken for the winners.
For our competition in 2021 there will be a grand cash prize 1.000 EUR. Other special awards and concerts in the season 2022/23 may be granted based on the judges recommendations.

WE ARE HAPPY TO ANNOUNCE OUR NEXT COMPETITION IN 2021!
APPLICATION DEADLINE: 22. July 2021
You can already apply!
Competition results will be published on the Rising Stars Grand Prix website, www.risingstars-grandprix.com, on  26. August 2021 (8 PM German time zone).

Winners who receive an invitation to play at the winners‘ concert, and decide to decline the invitation and are not able to travel, will receive their diploma (certificate) by email.

July – 30. September 2021
Caroline Fischer, piano and chamber music
Timo Schabel, voice (classical music)
Esther Feustel, violin
Young talents, students and professional musicians from all over the world can participate. Individual online lessons (one-to-one lesson) and flexible schedule. A wonderful opportunity for musicians of all ages to develop their performance skills, confidence and continue their creative music-making with our excellent tutors.
Masterclass fee (including application fee): 259 EUR –  3 online lessons (60 min per lesson)
You can already apply for the Online Master Classes, which take place from July till 30. September 2021. Online Master Classes application deadline: no application deadline.
You`ll find the application form here: https://www.risingstars-grandprix.com/competition/ (Please scroll down. The document link can be found below the Masterclass poster.) 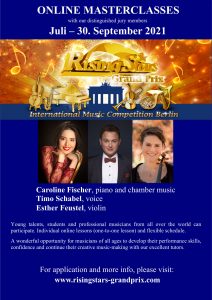 To apply for the ONLINE MASTERCLASSES, please fill out this PDF Document and send it to us via e-mail: info@risingstars-grandprix.com